BobSweep comes in two models: regular and “pethair.” And he comes in several colors. We purchased the “pethair” model (in beige), which is supposed to be even better than the standard BobSweep, and this review will be of that better model. 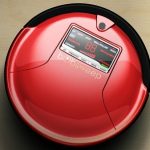 Bob is reasonably quiet, and our three cats have no significant problem with him as he works. They hang around watching him with apparent emotions ranging from indifference to interested suspicion. Unlike the vacuum cleaner, they do not flee when Bob starts up. They don’t ride him like some cats do, but they also don’t find him offensive.

Bob is a fairly impressive hard-surface vacuum, and his spinning whisk brush does clean edges and capture dust-bunnies quite effectively. That spinning whisk gets under furniture, bringing out hair, food kernels, etc., and Bob’s vacuum slurps up everything with wild abandon. Where Bob goes, he does slurp up what’s there to be slurped.

Bob’s vacuum container is ample, so you are not cleaning it out all the time. We usually go two or three sessions before needing to empty the receptacle. It is easily removed, dumped, and replaced. So, Bob, thought of as an easily-cleaned vacuum, is quite trouble-free.

Bob seems reliable. In over six months of regular use, Bob has not needed repair or maintenance. Push the “auto” button on his remote, and off he goes. He “just works” thus far.

Bob is dumb! I mean dumb, dumb, dumb as a bag of dirt clods. The idea that Bob has “artificial intelligence” makes mincemeat of that term. Our downstairs area is just under 1000 sq. ft. of laminate flooring. The literature claims that Bob will back out of his charging dock and “learn” your floor area, so that he becomes more and more efficient at going everywhere and learning fixed obstacles. False! Our observation over months is that, if anything, Bob is getting dumber and dumber. We’d love to give Bob a brain transplant, but there appears to be no way to do that.

For example, in his latest session, Bob never visited about 1/3 of the surface area, while instead he revisited some spots up to seven and eight times (we counted). So, we ended up having to sweep up after Bob over much of the floor anyway, even after he just tuckered himself out working and working the same areas again and again.

Bob does not learn! The promise is that Bob figures out his environment over time. False! We have seen exactly zero evidence to suggest that Bob’s “artificial intelligence” learns anything over time. He gets hung up and confused (spinning endlessly) in the same spots, despite the fact that, for example, our dining room set, dishwasher, coffee table, and other items never move. He always struggles to find his charging dock, even when he gives himself many minutes to find it as he’s almost out of juice. Sometimes he even “docks” only to not be lined up properly, thus is not really charging (which he should know is the case), and just dies with a fizzle, thinking he is “docked” when he really is not. This litany goes on and on.

My company actually designs artificial intelligence applications, and I am certain that in an afternoon we could design an algorithm for Bob that would be 100 times better than whatever Bob actually uses. So, Bob is not only dumb out of the box, but we see zero evidence that he gets “smarter” about his environment over time.

Bob seeks out ways to get stuck! Even after we pull everything up off of the floor, Bob, for example, found that if he located his charging dock and bunted it sideways along the wall, eventually he could free up enough slack in that cord to then move over to that cord and tangle himself all up in it. Freeing Bob and repositioning his dock solved nothing. (See the “dumb” point just above.) Bob again and again performed his “I’m determined to get hung on my own cord” routine, while ignoring 1/3 of the floor surface that he never visited. Thus, Bob shows a definite penchant for entangling himself on the one thing possible, despite the fact that he has to work at it relentlessly to make it happen… again… and again… and again (seven times he managed this move)!

Another example: There is one spot in our kitchen where Bob’s nose just barely fits under our dishwasher. If Bob nuzzles into that spot, he will invariably wedge himself up and start squealing in helpless rage and sorrow. Free Bob from that spot, and he shortly finds it again and gets stuck yet again. So, we have learned to place a stool, weighted with the trash can, in front of the dishwasher before turning Bob loose. But even that is no joy, which leads to the next point.

Bob’s “sensors” are pretty senseless! Bob supposedly has both a “bump” sensor and an IR sensor to detect edges and obstacles. Well, Bob will bump his snout into that positioned stool again and again, “intentionally” bunting that stool sideways, until he can punch his way through and get himself wedged up under the dishwasher… yet again. Bob is bound and determined to get himself wedged up there, despite the obvious and immediate distress he feels and expresses, and we have yet to discover a foolproof way to convince him that he must no go there.

I mentioned that Bob revisited the same spots as many as eight times in this last session, while avoiding about 1/3 of the whole floor. Well, in what can only be called anti-intelligence, the spot Bob was determined to visit eight times was the dreaded under-the-dishwasher spot! The spot he visited seven times was his docking station, so that he could get himself tangled up in his own cord. Thus, in this last session, we spent more time babysitting and solving Bob’s problems than we would have spent just sweeping the floor manually.

Bob will happily throw himself down a flight of stairs! Closely related to the previous point, and in defiance of what Bob’s manufacturer states, we have found that we cannot use Bob to vacuum our carpeted upstairs, because his “edge” sensors never sense an edge, such as the edge of the stairs. So, in every test, Bob gleefully plunged over the edge and started tumbling down the stairs. The manufacturer glibly states, “Bobsweep’s external frame is made of special material that won’t break easily. We are not claiming that Bob’s frame will not break if you push the poor guy off the stairs, or if you pick him up and drop him! But Bob’s frame can handle a drop of up to 20 cms without breaking depending on the surface he lands on.” Well, okay, but at hundreds of dollars, we’re not willing to test Bob’s resiliency! If the manufacturer is incorrect about Bob’s ability to avoid stairs in the first place, we won’t take them at their word that Bob can survive the fall intact.

Bob’s “mop” is 100%, entirely useless! Bob supposedly comes with the ability to “sweep” (actually vacuum) hard surfaces, as well as mop those same surfaces during his pass. Well, uhh… no! The “mop” is a tiny, about 24 sq. inch, microfiber pad that you are supposed to wet and put underneath Bob’s undercarriage. Then Bob drags that around wherever he goes, the theory being that he vacuums just ahead of where he drags the “mop.” In actual practice, the “mop” dries out within about five feet and then just becomes another (microfiber) collector of small amounts of residual dirt and hairs the the vacuum didn’t get. There is no “mopping” to be had, and you will mop your hard-surface floor after Bob is done, regardless of how thoroughly Bob does manage to vacuum. We have learned that the “mop” is more trouble than it’s worth, and we never have it affixed to Bob.

Bob is great in promise, not so great in practice. Ignore the wild-eyed positive comments and “references” you will read on Bob’s site. Who knows whether these are real people, how long they’ve had Bob, and how “enthusiastic” they are about everything they buy? Or experience is real and has spanned about six months at this point.

Would we buy Bob again, knowing what we know now? Well, we got him with a Groupon deal that saved a lot. Have we gotten a couple of hundred dollars of value out of him? Probably, yes. So, is Bob a rip-off? Well, no. Just know that Bob is no hard-surface panacea, and you will devote significant effort to preparing for him to take a run at your floor… and then you will devote significant effort to resolving the problems he creates for himself. If he happens to have a good session, you can indeed do other housecleaning while he is working. Just be aware that you will have to drop what you are doing at various points to help Bob recover from himself.

Bob is not a complete disaster, but he’s no “miracle” either. Buyer beware. Your mileage may vary.