Last year (2014), Masterpiece Cakeshop in Lakewood, Colorado was fined by the Colorado Civil Rights Commission, and it was also civilly sued by a gay couple for whom the cakeshop refused to bake a wedding cake. You can find an ACLU breakdown of the case against the cake shop here.

The ACLU argued: “Nobody gets to pick and choose which laws they want to follow. If a business owner is allowed to simply cite personal beliefs as a basis for turning away same-sex couples, then what stops a doctor from denying medical care or a pharmacist from denying a prescription?”

This case and several more like it across the United States have made national news, and a wave of Christian outrage is surging, particularly in light of the fact that correlative cases of discrimination by gay-run cake shops against Christians are not seen as “discrimination.”

I wish to argue that there is deep schizophrenia across this nation on the subject of so-called “civil rights,” and I will offer a practical suggestion of how to bring this fact before the public in a way that can arouse a sweeping demand for constitutionally-guaranteed “equal protection under the law.”

First, we should clarify exactly what a “civil right” actually is. You will find such verbiage nowhere in the constitution, so what is a “civil right”? Making the search for an answer to the question even more confused, an Internet search turns up dozens of definitions by various institutions, such as Cornell Law School, Civil Rights Findlaw, and even the United States department of Health and Human Services. These many and varied definitions conflict with each other, and none of them point to any passage in the constitution specifying what a “civil” right is, compared to, say, just a “right.” What makes a “civil right” such a special right?

Our so-called “Bill of Rights” is contained in the first ten amendments to the constitution, and these establish limitations upon the power of the federal government regarding individual citizens. Many definitions of “civil rights” include the rights that are acknowledged in the Bill of Rights, however most definitions go far beyond these rights to include the “Civil Rights Act of 1964” and even the “Americans With Disabilities Act of 1990.” Some definitions go so far as to include every federal law that could somehow be considered to affect a “right” that anybody might have in any context.

The struggle we citizens face in seeking equal protection under the law (based upon the 14th amendment) is that a “civil right” is a moving target: Supposed “rights” regarding behaviors that were very recently even illegal are now counted among “civil rights,” which in the minds of many elevates them to the top of some fictional rights-hierarchy. Many act as if they believe that there really is a hierarchy of rights, with civil rights at the top, constitutional rights (such as those contained in the Bill of Rights) just under them, and something like “everyday rights” further down under these “civil” and constitutional rights.

This hierarchy can be seen in the logic of the Colorado Civil Rights Commission’s argumentation, where the right of a private business owner to deny service to anyone is “weighed” against the (freshly minted) “civil right” of a gay couple to not only wed but be served by a particular cake shop of their choosing. Supposedly, a “civil right” trumps the everyday right of the business owner to refuse on the grounds of conscience: “As a Christian, I don’t wish to participate in any way in a gay wedding.” The fact that the business owner is Christian and has a right to freedom of speech and to freedom of the exercise of religion by the Bill of Rights is thus trumped by the so-called “civil right” of the gay couple. So, clearly, in practice there is a working hierarchy of rights, with so-called “civil rights” at the absolute top of the hierarchy.

As mentioned above, it is at least odd that these absolutely-trumping rights are nowhere mentioned by our constitution, and every attempted definition of “civil rights” includes rights such as are mentioned in the Bill of Rights, yet, somehow, these “civil rights” trump all including the rights that they supposedly contain. Violating the right to life, for example, is murder and very, very bad. However, violating the right to life of a “protected class member” is a “civil rights violation” in addition to the murder and is very, very, very bad! Manage to get yourself into a “protected class,” as gays have now done, and suddenly your “civil rights” trump everybody else’s merely constitutional rights. I’ll fully sustain that claim as we proceed.

I suggest that we should dispense with the term “civil rights” entirely, as it fails to explicate and actually only further muddies the waters. Instead, I wish to present an “equal protection” argument that clearly reveals the flagrant inconsistencies in these “civil rights” cases, while it also demonstrates how gun owners are particularly discriminated against in ways that can only consistently be considered “civil rights violations.”

My arguments herein are specific to Colorado, but I believe that they can easily be extended to most of the other states, as most states have comparable inconsistencies.

In Colorado, you can openly carry a firearm in every county except for Denver County (which was, amazingly, granted a grandfathered exemption). There are particular-place restrictions, such as federal buildings, courthouses, and so forth. However, private business are not exempted; you can open-carry within any private business that is not located within the County of Denver. With one restriction….

If the business owner posts a sign in a prominent location visible upon entering the business, and that sign explicitly forbids firearms on the premises, this posted sign counts as the first step toward the business owner being able to lawfully eject the open-carrying individual from the business. The second step is that an authorized representative (not just a clerk or low-level employee), such as the owner or the manager, must approach the open-carrying individual and ask him/her to leave because of the firearm. If at that point the firearm-bearing individual declines to leave, then the business may call the police and have the individual forcibly ejected as well as even cited for misdemeanor trespass. If the individual simply leaves upon request, no law has been violated.

So, in a nutshell, in Colorado, if a business owner has any problem with guns on the premises, he/she need merely post a sign and then inform a firearms-carrying individual that they must leave the business upon pain of being cited for trespass. This is “We reserve the right to refuse service to anybody” on steroids! And this anti-firearms sign is precisely akin to a sign that might say, “We refuse to make wedding cakes for gay couples.” The firearms-comparable sign would say, “We refuse to make wedding cakes (or in any other way serve) persons bearing firearms.” The former sort of sign is, as we have recently seen, a “civil rights violation,” while the latter sort of sign is upheld by force of law. What is the substantive difference between them?

Let’s get past the being vs. behavior issue. Both gay marriage and open-carrying of firearms are public behaviors. As behaviors, both have moral weight and can be debated in terms of morally legitimacy. But at present, both are on a par in the eyes of the law.

Both gay marriage and open-carrying are valid and legal behaviors according to both state and federal law.

Both an anti-gay and anti-gun business might say, “I don’t care what you do in the privacy of your home, but I won’t support your activity openly in my place of business.”

Yet, somehow, when the anti-gay business owner says such a thing, he/she is condemned, fined, and sued for a “civil rights violation” and “bigotry,” yet the anti-gun business owner is legally-supported and enabled to thus discriminate.

This post discusses the guns/gays laws as they presently are practically contemplated and enforced in Colorado.

The federal government (echoed by the State of Colorado) says “yes” to the latter but “no” to the former. Upon what substantive principle can this perspective be sustained?

The fact that the State of Colorado has not tumbled to the implications of its position yet, and it has not sorted out how to handle “civil rights” vs. constitutional rights, is understandable. But it is the purpose of “eternal vigilance” is to point out when laws and practices do not conform to the equal protection clause, and thereby to call attention to needed reform. 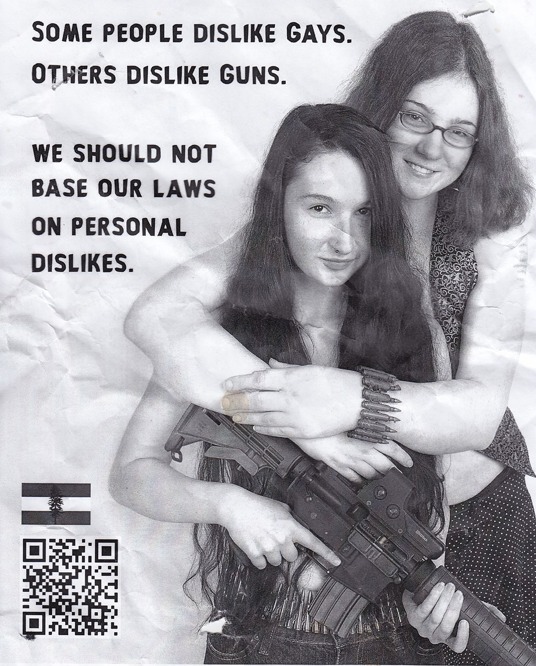 It seems to me now that Colorado has two options here in order to comply with the 14th amendment of the United State constitution. It may either:

1) Ensure that no business may restrict the open-carrying of guns on its premises and that open-carry must be legal throughout the state, including in Denver County. Denver County cannot deny marriage licenses to gay couples, so it should be not allowed to retain its “grandfathered” position on open-carry.

Whatever is the choice between (1) and (2), Denver County’s “grandfathered” position against open-carry remains a significant legal inconsistency and must be eliminated; open-carry must become legal in Denver County.

As a lawful citizen committed to the owning and bearing of firearms, I am satisfied with either result. However, the current state of affairs in Colorado (and elsewhere) is a violation of my “civil rights” and the “civil rights” of other lawful gun-carriers. As a United States citizen, I am entitled to equal protection under the law and conformity to the 2nd amendment.