These and a host of related questions will be our subject over the upcoming 23 weeks. In lectures and online materials, we will explore philosophy of science and whether or not the arguments in favor of evolutionary theory are sustainable. In the process, you will learn what evidence is and how to evaluate it, what arguments are and how to evaluate them, basic logic, and an introduction to philosophy of science.

These lectures will be presented at a Christian church, but Christianity is not presumed during the seminar. The Bible will not be employed as a source or reference, and none of the argumentation presented in the seminar will be “Christian biased.” Instead, strict philosophical rigor will be the standard.

Why a philosophical approach?

When many people think of philosophy, they think of ancient guys in flowing robes, wandering around with their hands waving as they spout all sorts of “deep” and mostly irrelevant musings. 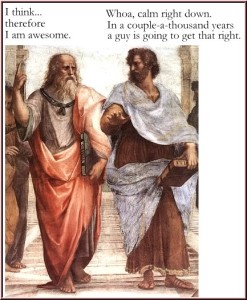 Click this following link to explore the question: What, exactly, is philosophy?

This course is designed to help you become much, much better at “philosophizing,” which will have a positive effect on all aspects of your everyday life. You will learn the principles of correct reasoning, and you will learn how to quickly identify incorrect reasoning (and it is amazing how much of that there is all around you). In the process, you will learn to really hear and understand what people (like, politicians, for example) are actually saying. You will quickly learn how to cut through the hype in advertisements. You will be better able to evaluate your own beliefs and those of the people around you. And, in particular, you will learn exactly how the theory of evolution is not philosophically sustainable.

Another thing is that the majority of the world’s population does not accept the Bible as the “word of God.” Thus, Christians in particular must recognize that an inferential process must be employed to convince non-believers in the God-inspired nature of the Bible.

One thing that most Christians do not realize, and that will be emphasized during this seminar, is that even if evolutionary theory is demonstrated to be unsustainable or inadequate, that result would not neatly elevate the Bible as the ultimate source of the truth about origins. The failure of the naturalistic paradigm would not throw open the doors to a strictly Biblical version of supernaturalism. Quite a number of argumentative steps would be required to move from the inadequacy of naturalism to the elevation of the Bible over other putative supernaturally-inspired texts or even to the move from a vague “intelligent design” to any particular sort of theism.

However, the failure of naturalism as an overarching paradigm would indeed throw open the doors to careful consideration of various supernatural paradigms. And it is, then, a doable and systematic process to evaluate various supernaturalist theories and putative “inspired” texts for internal consistency and breadth of explanatory power.

So, certainly, a “first step” on the inferential path toward Christianity is to demonstrate the failings of the naturalistic worldview. That demonstration certainly cannot presume the truth of Christianity nor the inspired nature of the Bible!

This seminar is designed to appeal to Christians and atheists alike, those that are “spiritual but not religious,” and believers in non-Christian religions. For Christians, this seminar will provide a rigorous foundation for starting that inferential path to Christianity, and in so doing it will provide a model for how to explain why you believe what you believe to others. Everyone will benefit from the methods of systematic evaluation of evidence in general.

Whether you realize it or not, we all “do philosophy” throughout the day. We are constantly making inferences and evaluating evidence. However, because most of us are not actually trained to do this well, we typically often draw invalid and fallacious conclusions… and often on the basis of insufficient evidence. And we are typically quite content with our perspectives. Human beings do love a good status quo! This seminar is designed to help you start doing good philosophy, employing intentionally good inferences… and those on the basis of sufficient evidence.

The seminar is sponsored by a Christian organization very intentionally to establish that Christianity does not consist of anti-intellectual, anti-evidence dogma. In this seminar, we will grant science all of the evidence it touts. Unlike the vast majority of anti-evolution literature and media, this seminar will not debate the “facts” themselves. Instead, we will take the following line: Grant science all of its facts, and then let us see if the inferences science employs from those facts are sustainable. Finally, we will look at aspects of reality that, it will be argued, cannot in principle be explained under a purely naturalistic paradigm. Thus, Christian “dogma” will be found nowhere in the argumentation, and, as mentioned above, the truth of Christianity will not be taken to “follow” immediately from the failure of the naturalistic paradigm.

You will get value out of this seminar proportional to the effort you put into it. In the past, taught in a university setting, students were motivated by cost and grades to “do the work.” You will not have such motivations. That gives you the opportunity to “do the work” for far loftier motivations: intellectual honesty and genuine truth-seeking. If you “do the work,” you will find this seminar akin to a “revelation,” as the methods of thought and information will have a dramatically positive effect on your entire life. Yes, prior to learning philosophy in this seminar, you have gotten along just fine in your life. But I can also report that countless people have told me, “I wish somebody would have taught me things like this decades ago! What a difference it would have made.”

Each week a new post like this one will become available (and linked from the index page). Each post will contain explanations, definitions, readings, and links to media and other materials designed to help you engage with each upcoming lecture. And that next lecture will talk about what you have just read and viewed on each preceding post. The pace is much slower than in a typical university course, because you will have a whole week to read, view, and process the materials prior to each lecture.

You can also comment on each post, if you become a member of this site (it’s free). The comments will become like a running forum, and I encourage you to discuss with each other! As the terms of usage signify, please remain civil and productive. But also feel free to debate and to disagree, even vehemently. Perhaps you disagree with even this very post. Perhaps you are a Christian and think that “the Bible and the Bible only” is the only thing needed to know the truth. If so, post your comment, and let’s talk about it. Let us engage in the Art of Reasoning together!

In addition to the materials I will provide on this site, I would encourage you to purchase the following books. I will reference them throughout the seminar. I will do my best to give you the needed excerpts to stay engaged. However, there is no substitute for reading original primary texts and entire passages in context.

This book list is not an exhaustive bibliography. However, this list is an excellent jumping-off point into the literature on this subject, and you will undoubtedly be drawn into additional readings as recommended by the authors of the following books.

I have tried to list (and will appeal to in the seminar) texts that are true “classics” rather than the most recent, bleeding edge literature. These “classics” have stood the test of time and ongoing evaluation. I have also sought to provide a list that will be accessible and understandable to the “lay reader,” rather than highly technical sources that would require an extensive background. In particular, the first book on the list is the best and most lay-accessible overview of the philosophy of science I have found. And I have contemplated cost in my recommendations: Scientific Inquiry is available online, used, for about $10!